The fifth cross student exchange was hosted by ENSINUS - Estudos Técnicos e Profissionais SA in Lisbon and took place from 02nd to 08th of February 2020. 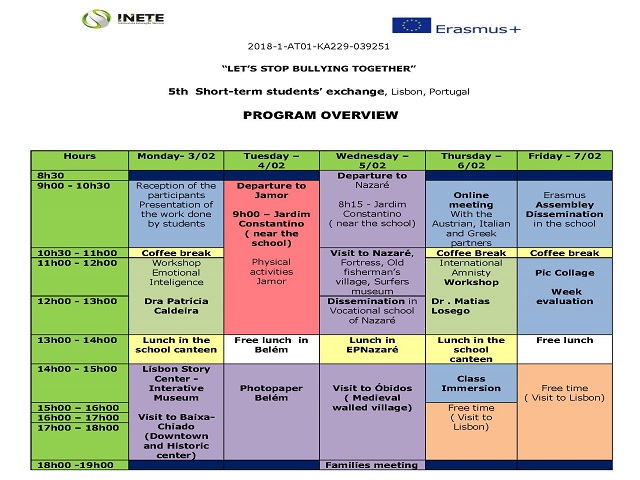 Sunday| 2nd February 2020
The participants arrived at Lisbon and were received by their hosting partners. 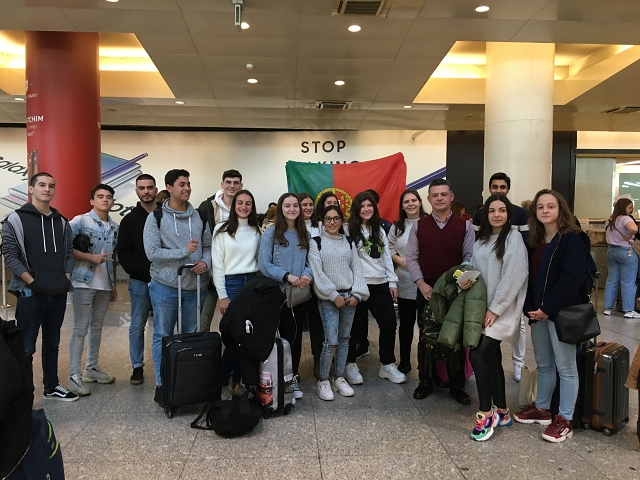 Monday| 3rd February 2020
In the early morning, teachers were taken to INETE and had the opportunity to visit the school. The Headmistress opened the week with her welcoming speech. Also in the morning it was time to watch students’ work on the topic of this mobility.​

After the coffee break, students participated in a Workshop on Emotional Intelligence, a strategy to prevent violent behavior among students. The workshop was developed by Dra Patrícia Caldeira, our psychologist, who helps young people to deal with their emotions, to learn how to identify and understand some hard and deep feelings like angriness, fear, frustration, sadness, and change it into more positive emotions. Students were engaged in some insight dynamics which motivated them to think about the way they perceive who they are and their relation towards the other. 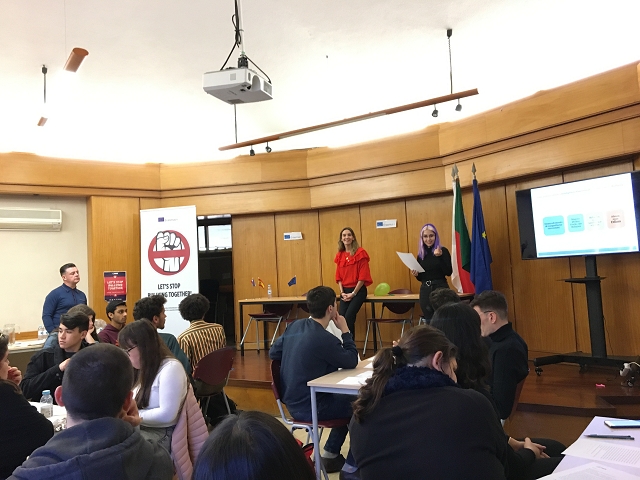 The Erasmus team, both students and teachers had a lunch at School canteen and had the first opportunity to taste Portuguese gastronomy – Caldo verde, roasted stuffed meat and maçã assada. In the afternoon the Erasmus group went out for a study trip in the historic center of Lisbon, near river Tejo. They visited Lisbon Story Center, an Interactive museum of the history of Lisbon. Students could learn the multicultural origins of Lisbon inhabitants, both the mythological and the cultural. They could understand the many historical changes across the centuries, namely the period of the Discoveries, when Portugal gave worlds to the World, the great 1755 earthquake and tsunami that nearly destroyed the whole city and beyond; the rebuilding of Lisbon under the leadership of Marquis of Pombal, and the political Coup d’etat which put an end to the 40 years dictatorship. Afterwards, the group did a walking visit to Lisbon Iconic Terreiro do Paço and along the river line, where there are still some memories of the age of the Discoveries. Students along with their hosting friends returned home. Teachers continued their walking tour through historic downtown and took the first impressions of its irregular topography by which is named the city of the seven hills. Later, teachers’ team had the welcome dinner at a local restaurant – O Raposo – and again had the opportunity to taste Portuguese food and wine. We welcomed Ana Baio, our Psychologist responsible for international internships and Erasmus mobilities.

Tuesday| 4th February 2020
We left the school neighborhood by bus to a green park just outside Lisbon to work on team building through the practice of tree climbing. This activity was held in Jamor, an Olympic stadium and park where High performance athletes practice every day for their competitions.This activity was thought to strengthen the cooperation and communication among the group, but also to work on individual soft skills like resilience, self-confidence, empathy, respect. This was something that students really enjoyed. They felt challenged and made them to understand better the importance of focus, of trust and reasoning when we make choices. School canteen prepared a packed meal for lunch. Students made their meal while in the park.

In the beginning of the afternoon, the bus took the group to another historic neighborhood of Belém. Students and teachers were given a Peddypaper guide to discover the area and its monuments. The students, organized in mixed groups, had to rally from Mosteiro dos Jerónimos to Torre de Belém, two ex-libris of the Discoveries. They also had to understand the representation of the mapa mundi that represents the spirit of adventure that marked the beginning of what we call globalization and the meaning of giving new worlds to the world, one of the Discoveries’ motto. This peddypaper was a challenge that got an evaluation and winners were announced in the last day. The group also had the opportunity to taste Pastéis de Belém, one of Lisbon delicassies.

Wednesday| 5th February 2020
This was the day for the excursions and visits outside Lisbon. We left Lisbon early in the morning and head North to this really picturesque fisherman’s village facing the Atlantic which still preserves Portuguese most finest traditions and is also a World Surf spot with the highest waves ever registered. 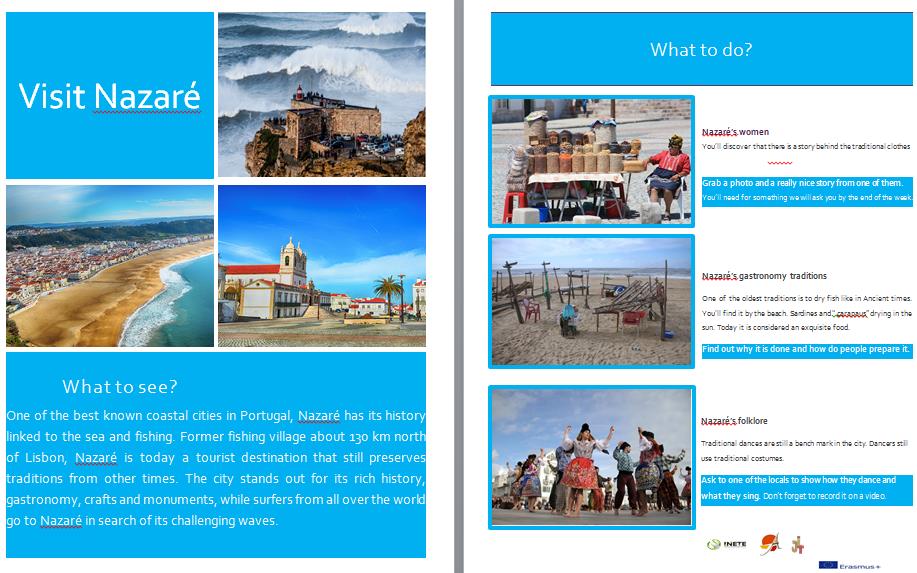 The aim of the visit was to understand the traditional way of living and the bonds among the community which help to protect members of the community. The time to visit Nazaré was fulfilled with close observation of traditions, the way people respected traditions and welcome foreigners at the same time. Students formed groups according to their empathy and took a guide to explore visually the place, meet locals and understand better the way people live, their customs and traditions.

Before lunch, in an effort to promote the creation of a network within the European schools, the team talked to a group of students and their teachers about the topic and also about Erasmus+ projects. Students gave their testimony on how joining this project has made them raise their awareness to respect others, to live in a more tolerant world. This was a real important moment to create a wider consciousness in schools of our commitment towards a better society, beginning now with the support and safe environment we create in our schools.

We had lunch at a Secondary Vocational school in Nazaré – Escola Profissional da Nazaré. Students had the opportunity to answer to their hosts regarding the project, their expectations, namely living with a family, mobilities, and the outcomes of their reflexions and work. The group was very enthusiastic and had lunch altogether at the school canteen. After lunch, before our departure, students made a guiding tour to the school and showed where they had their practical cook lessons and workshops.

After Dissemination, the visit continued to nearby lovely medieval walled village, namely Óbidos. Óbidos is at the heart of a multicultural program that brings hundreds of people frequently to its core, either for cultural, civic, literary purposes. Students formed groups according to their empathy and took an outline guide to make them discover its beautiful secrets and talk to those who still live there in community, learning their traditions. Students had the chance to taste its savory delicatessen and learn more the time when Portugal had to build these strategic fortresses in high places to sustain invasions from different threats, either the Moors or other tribes coming from Northern Europe, or the pirates from the nearby Ocean who came inland to steal food or take women with them. 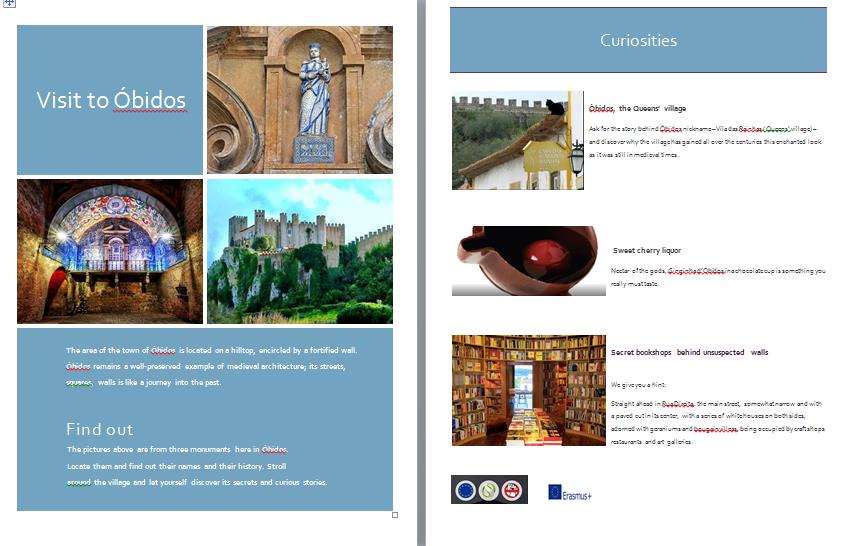 We returned Lisbon late in the afternoon. At school there was a welcome committee waiting for us. Hosting families and the Erasmus team were there to have a light meal and take the chance to fraternize and feel the vibrant energy among the group. We also welcomed Raquel and Isabel, the family who hosted Helena, the girl who got ill in the last two days. It was a very warming meeting.

Thursday| 6th Febraury 2020
In the fourth day of the students’ exchange week it was scheduled an online meeting with the partners and students from Greece, Austria and Italy that were also in their students’ mobility in Sicily. Held in the morning, students from both groups made an effort to present their opinion about the project, the work they had done and also the outcomes of their immersive experience in an hosting family. Students also recorded a video with a message to the colleagues.

After coffee break, it was time to a workshop on Human values and the understanding of the mechanisms that are triggered when we don’t respect ideological, cultural, physical differences between people. This workshop was developed by Matias Losego, International Amnesty representative in Portugal who is frequently asked to go to schools to implement a reflexion on behaviors abuse on others. International Amnesty is one of the NGO’s that operate in Lisbon regarding Bullying. INETE has started a partnership with International Amnesty since Staff’s mobility in Lisbon last October in order to develop a club of volunteers to develop students’ awareness and other members of the community to respect other human beings.

The team had lunch at the school canteen. In the afternoon it was time to develop activities of Class Immersion with the students who are taking part in this project. There is a pedagogic methodology in our school, project based learning, in which take the commitment to take further their civic responsibilities. Our students invited their fellow colleagues to present to the Erasmus group their work One of the projects is related to the creation of small enterprises which take in consideration the improvement of the performance of a disabled person regarding their mobility, their integration or their autonomy. The other project was a civic campaign among the students of the school in order to identify and make proposals that would benefit the whole school community. Both projects were developed under the methodology curricula flexibility. Students were able to ask questions, make suggestions on the development of some items.

Friday| 7th February 2020
In the last day of the mobility the team attended an Erasmus assembly which is one of the strategies that the Club Erasmus in INETE has developed as a strategy to create awareness among students against Bullying. Students worked in groups and were given a worksheet to discuss together what the study case meant to them. The groups then shared their ideas and their interpretations with the other groups.

After the coffee break it was time to evaluate the work done during the week and all the items regarding the organization of the week. Besides filling in the evaluation form, students also made their collection of the better moments of the week in pic collage. They learnt to use the app in their mobiles and created a visual board with captions that were representative of their week.

Dra Fernanda Torres, INETE’s Headmistress delivered the Certificates of participation to all. It was also time to exchange presents under Erasmus+ spirit. 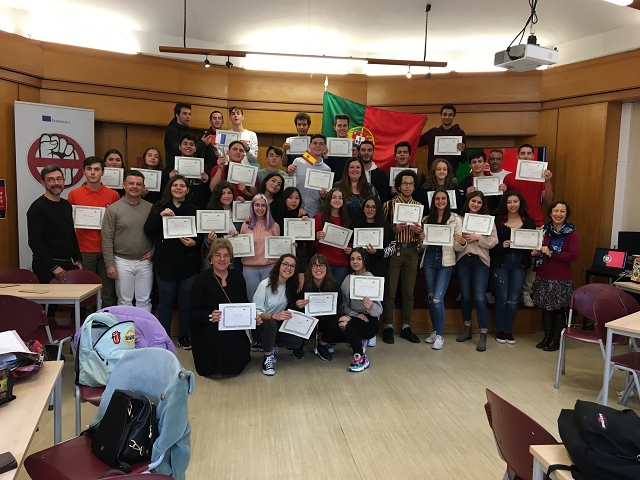 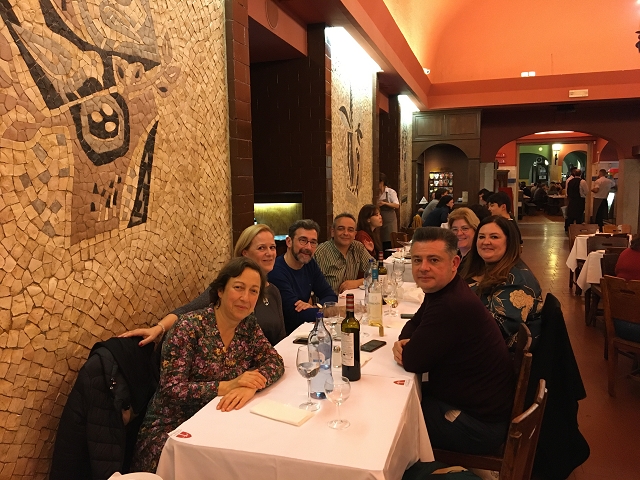 Saturday| 8th February 2020
Participants left Lisbon on Saturday. The hostess team took the teachers from the hotel to the airport according to their flights schedule. Hosting families took their adoptive child (expression used by one of the parents) to the airport. Each group took the farewell picture.