The fourth cross student exchange was hosted by I.I.S.S. Concetto Marchesi in Mascalucia (Italy) and took place from 02nd to 08th of February 2020.

Sunday, February 2nd
Our Erasmus journey to Sicily, took us about 16 hours, started on Sunday the 2nd of February at 7 am in Klagenfurt. First, we travelled to Venice Mestre by Flixbus with an Italian bus driver. Some students were sleeping during the trip and some were chatting or listening to music, but nearly everyone (even the teachers) were talking about the bomb-alert in Venice. Thankfully, nothing happened! When we finally arrived in Mestre, we decided to go to Venice Santa Lucia by train because we had enough time and we were interested in seeing the city on the Lagoon. For some of us it was the first time in Venice and so we were very excited. We took many pictures but then we went out for lunch and ate many different typical Italian dishes, like pizza, pasta or lasagne. Repleted and very excited, we drove back to Venice airport to fly to Catania in Sicily. Two participants were especially nervous, because it was their first flight. „Now I understand what people mean, if they say that humans look like ants from above“, they said with a huge smile on their faces. However, it is unbelievable how time flew by and suddenly after one hour and 45 minutes, we arrived in Catania. Finally, at half past nine we got to meet our Italian host families and friends. After taking a group picture, everyone went home with his or her Italian partner.
Milene Tatschl, 6a 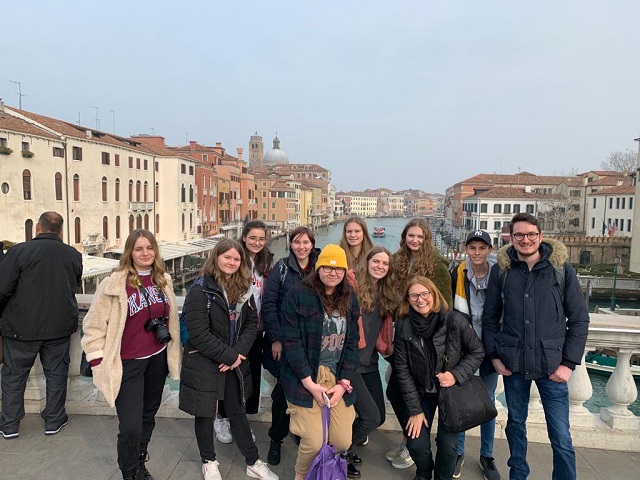 Monday, February 3rd (part I)
Today was our first day in Sicily. At 8:30 we all – the Greek, the Italian and the Austrian people-met at school. Most of us were taken there by their host parents and some took the bus. At school, we had a little welcome meeting and we were introduced to the headmistress of the Italian school. Then we played some games to get to know each other. After that, we had an interesting workshop about bullying and cyberbullying with a psychologist. Our “hostsiblings” showed us their school and we ate some typically Sicilian breakfast. Moreover, we had a little presentation of the Saint Agatha Festival, which were celebrated in Catania during the exchange. After that, we had a lunch break. Some of us enjoyed packet lunch others went to a restaurant. After lunch, our host-parents took us to the city centre of Catania where we spent the rest of our day. All in all, this was a very interesting first day. We got to know each other better, learnt something about Catania and visited the school.
Laura Horacek, 7b 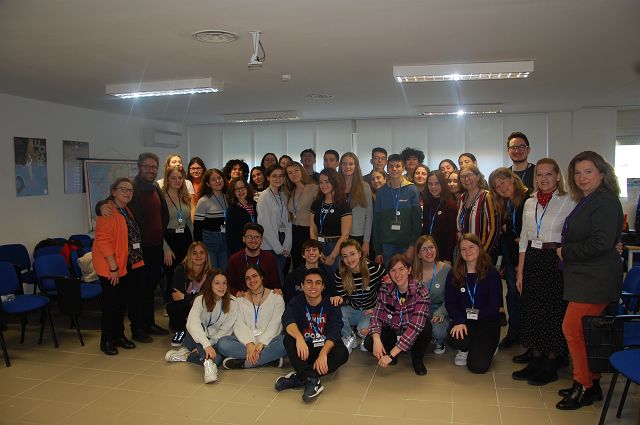 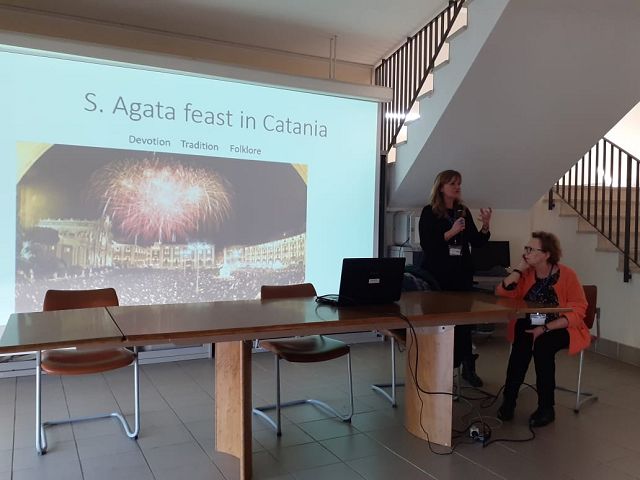 Monday, February 3rd (part II)
When we arrived at the meeting point, we started to walk to the underground, which took us to the city of Catania. There, we split into an Austrian and a Greek group. Both had their own tour guides. We walked through the beautiful centre of Catania and watched some sights, for example the „Teatro Romano di Catania“. We also learned about the history of Saint Agatha, a virgin martyr of Christian antiquity, tortured for rejecting a man, who just wanted to possess her. Saint Agatha is the patron of Catania and every year many, many people come to celebrate this festivity, which lasts for three days. After this, we went to an apartment with a big balcony, where we could watch the start of Saint Agatha’s Festival including a very big firework and a big crowd of people. We also had dinner while watching this beautiful view. It was very interesting for us to see how the people of Catania celebrated Saint Agatha.
Elena Prapotnik, 6a 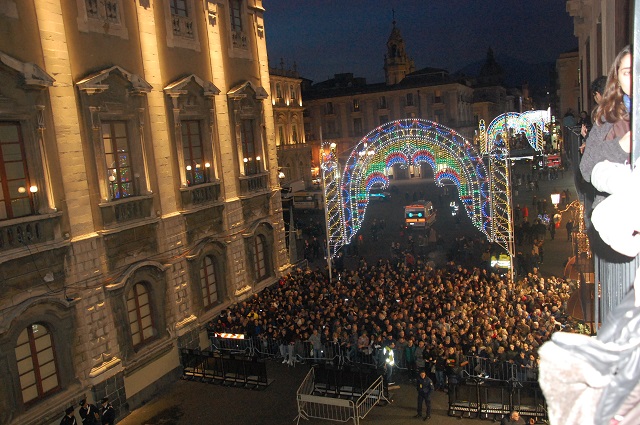 Tuesday, February 4th
The students met at Piazza Abramo Lincoln in the pasticceria and gelateria C & G (Cioccolato e Gelato). At about 9:00 we made our way to the subway station Giuffrida. One stop later, in Borgo, we made our way to the Istituto Nazionale di Geofisica e Vulcanologia (INGV). It is an institute that focuses on the volcano Etna and on all the other volcanoes in Sicily. We saw a presentation about Etna and its recent activities. After that humorous and interesting presentation, we were split into two groups. One went into the surveillance room and the other one heard a bit more about volcanic rocks and geology in general. In the surveillance room, we learned more about the work that the INGV does. Afterwards we had some free time, you could call it a lunch break, until 13:20. We visited a park with a market inside. After that, we used the subway to get back to Giuffrida and a bus to get to Taormina. In Taormina, we visited the Greek theatre where you had a beautiful view of the sea. The city itself looks typically Italian and it is no wonder that it is well regarded as a vacation spot. After the short visit, we had some free time until 18:15: we could look at the city and enjoy the shops. The main quest for a lot of the students was to find a good gelateria but most of them were closed. But eventually we found one and the ice cream was absolutely worth the search. After a stunning sunset, we took the bus home and spent some time with our host families.
Birgit Sträussnigg, 6b 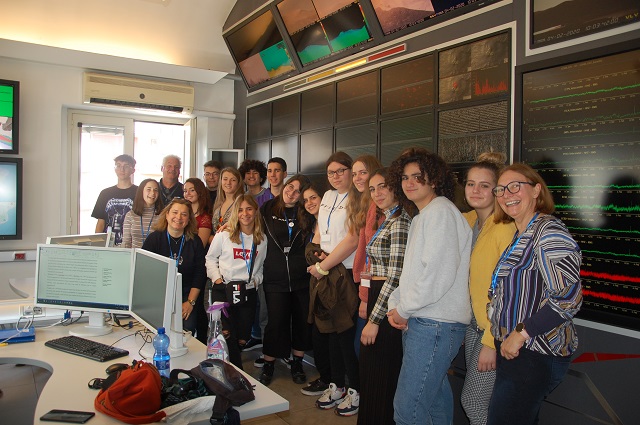 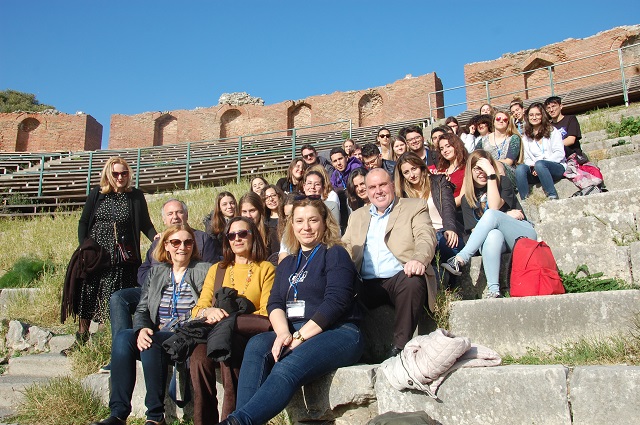 Wednesday, February 5th
Wednesday was a very special day because we had a birthday kid, Laura H. Her sweet 17th birthday. Therefore, our trip to Syracuse started in the bus with the birthday song in three languages. After we had arrived in Syracuse, we were surprised by the weather. It was stormy, and it started to rain and stopped and then it started and stopped again and so on. But that didn’t make us gloomy because we had a very friendly guide, who was showing us the interesting Greek theatre and the ear of Dionysius. On the way to the centre of the city, we took a funny photo with the statue of Archimedes and we saw the relics of the Temple Apollo. After the city tour, we had lunch and then some free time. Back at the bus there was a surprise for Laura. She got a birthday cake and we sang Happy Birthday again. In the evening, some of us went to play laser games and had dinner.
Laura Esterl, 6a 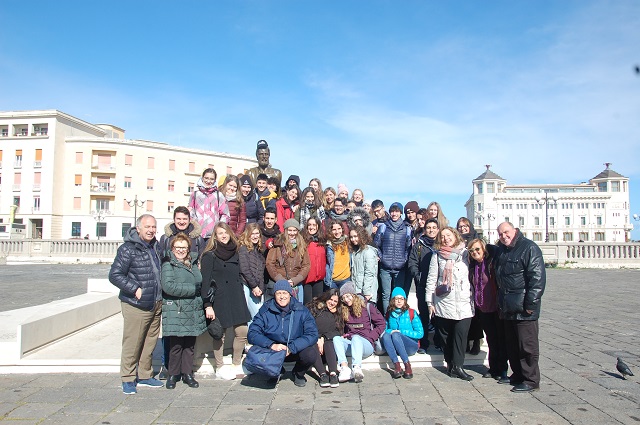 Thursday, February 6th
Our fifth day in Sicily started at the school of Mascalucia, Concetto Marchesi, where all groups showed their project works they have done in preparation of the exchange. We started with a sort of dialogue from the Italian team which was very personal. The next ones were the Austrians who showed the video they had prepared. It was a real success and everyone liked it. We finished with the Greek students who had prepared a monologue and a song, both symbolising our topic very well. We also saw the product of the Spanish and talked about. At the end, we had discussed lots of important questions and clarified everyone of them. Now we are all experts about the topic “Cyberbullying”.
After that, we listened to two songs, one in Italian (Billy Blue) and the other one in German (Schunder Song). Both represent the topic very well and all of us had a lot of fun explaining some phrases in English. After a ten-minute-break, we started the video conference with the Lisboan team and their exchange students. Although there had been a few complications with the technology, we had a lot of fun talking to them and meeting new people. At 10:30 o’clock, we listened to a lecture by a Sicilian film director who told us about his life in a very motivating and funny way. He gave us some tips for life and in the end, we could watch one of his movies, which had literally been cast by his own hands. The film is called “Handy”. It took until 13:30 o’clock, then every one of us went home to their host families and had lunch. Our next stop was the town hall of Mascalucia where we met the mayor at 16:00 o’clock. He showed us the conference room and we told him something about our project. After that, we all had free time and went to a playground nearby where we had a lot of fun together, taking silly pictures or playing soccer. Little by little, everyone left the park and enjoyed the evening. Some of us went to a shopping centre or just stayed at home with the families where we ended the evening in a calm way.
Saphira Jöbstl, 6a 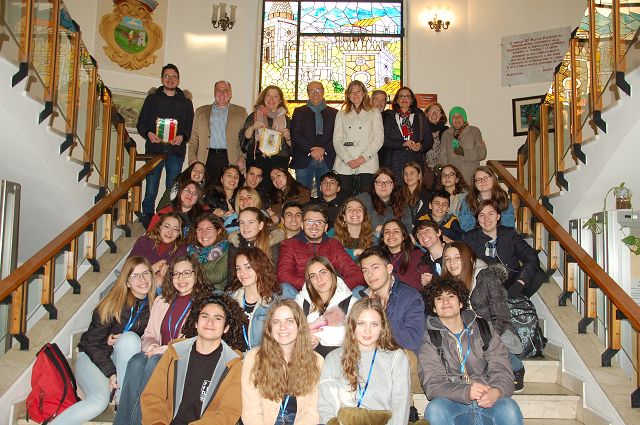 Friday, February 7th
After breakfast, we left early and met the other pupils at the underground in Catania. We got to see the University of Catania, which had been a monastery many years ago. Our tour guide told us that there lived a maximum of 55 monks, which is compared to the monastery in St. Paul today very much. First, there had only been one building, which built by monks, because they wanted to escape the bad conditions of Etna. Later, they built a second building, which is now surrounded by lava stone. After the tour, we were allowed to go into the church next to the University. In the afternoon, most of the students used their time to go shopping and have lunch but some of them also went on an Etna tour with their hosting families. At 8 p.m., we had to be in a restaurant, to participate at the farewell event, where we got our certificates for participating in this Erasmus+ project. The headmistress of our partner school “Concetto Marchesi” delivered a speech in which she talked about the importance of such a project. She reminded us that we are the future of Europe. We spent the last few hours having fun with our friends, but all in all, it was very sad that we had to leave the next morning.
Magdalena Pototschnig, 7a 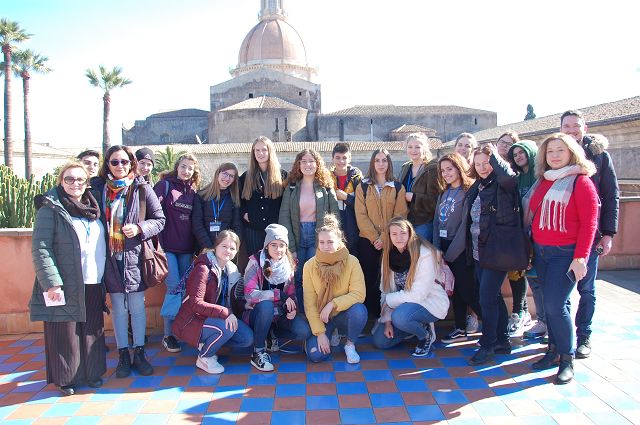 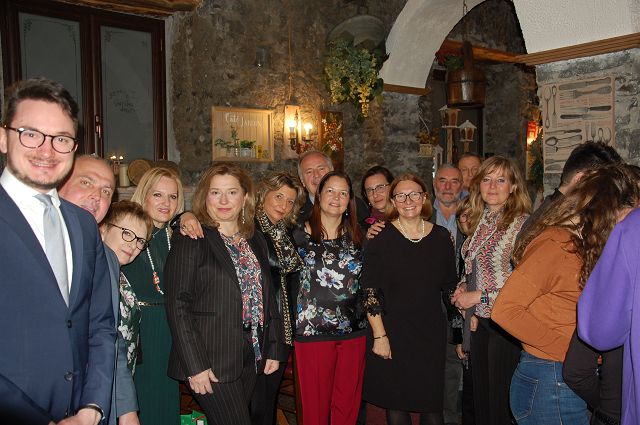 Saturday February, 8th
Saturday was the day we left. After having packed my things and breakfast, my host family drove me to the airport, where we should arrive at 7:30. There we met our teachers and the other exchange students. The teachers gave us 10 minutes to say goodbye before we checked in our luggage and went through security. The farewell was very emotional with many tears. We promised each other that we would meet again soon. After the goodbye, we went to boarding and finally flew to Venice. Once in Venice we spent two of our four hours waiting at the airport and ate something. Then we got on a bus that should take us to Mestre train station. When we arrived at Mestre train station, we spent the rest of our waiting time at MC Donald’s. Finally, at 16:05 we boarded the Flixbus and travelled towards Austria. At 20:20, we finally reached Klagenfurt train station. We said goodbye to the teachers and our friends and went home. We were all a little bit sad that the great adventure Erasmus+ in Sicily had found its end.
Luca Adlbrecht, 6a 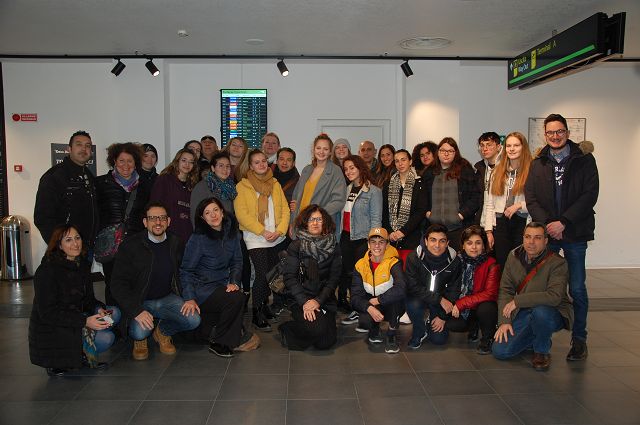