The third cross student exchange was hosted by Öffentliches Stiftsgymnasium in St. Paul im Lavanttal and took place from 10th to 16th of November 2019.

Sunday, 10th November 2019
Sunday was the day we had been looking forward to for almost a year now. The arrival of our Greek and Italian exchange partners. All 16 of us either went to the train station in Klagenfurt to pick up the Italians or to the airport in Graz to meet the Greek pupils. We had prepared colourful posters for an extra-warm welcome. Since their flight was a bit delayed, we had to wait for some time but once they arrived, it was definitely worth it. Some drama also occurred because three of the Greek students lost their luggage on their way to Austria. Still, this nuisance didn’t affect our mood and the excitement we all felt. After exchanging greetings, we all went our separate ways to grab dinner and to meet the families of the host students. All in all this was an amazing evening packed with joy.

Monday, 11th November 2019
On Monday all Erasmus groups met at the entrance of the grammar school for an introduction of the project and to get to know all the members who are involved. 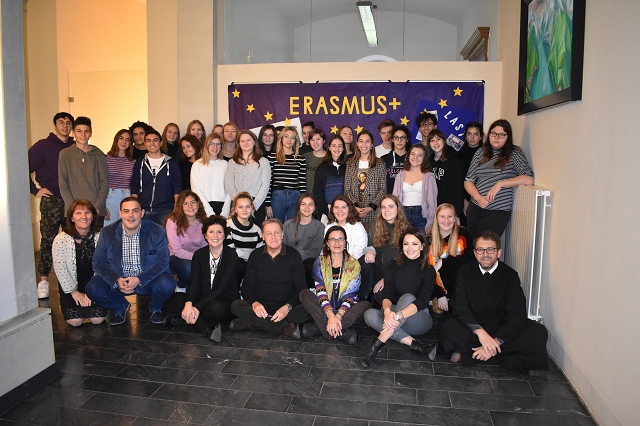 After the introduction the groups played two games. In the first one we talked about ourselves, about our hobbies, family and interests. In the other one we sat in a circle with one person in the middle, and this person pointed to someone who had to either guess the name of the person on the left or on the right side. 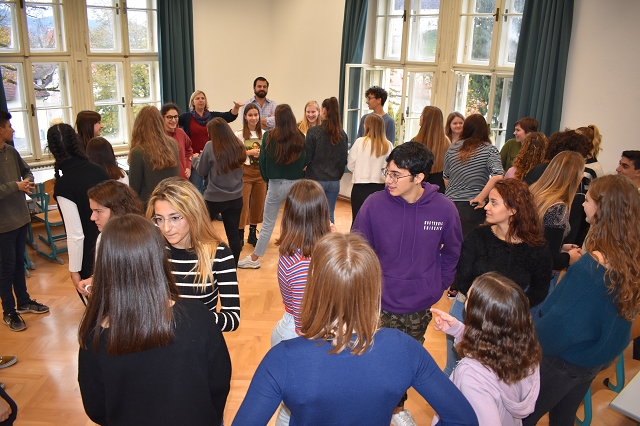 Once the game was finished, we went to the monastery of St. Paul where a police officer talked about the topic of “bullying”. There was also a group workshop, and we spoke about the reasons and consequences of bullying. Afterwards we heard a presentation of the Greek students and watched a video of the Austrian group. 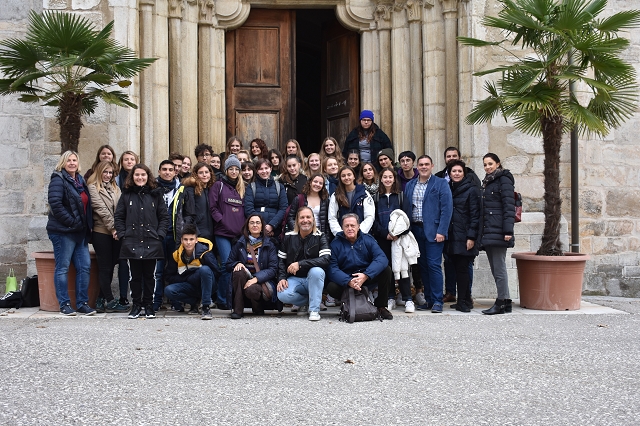 After a tasty lunch in the dining room of the school we met at the school gym and played a basketball tournament. It was an incredibly exhausting experience but everyone gave their best and had a lot of fun. This lesson marked the end of our first school day together. 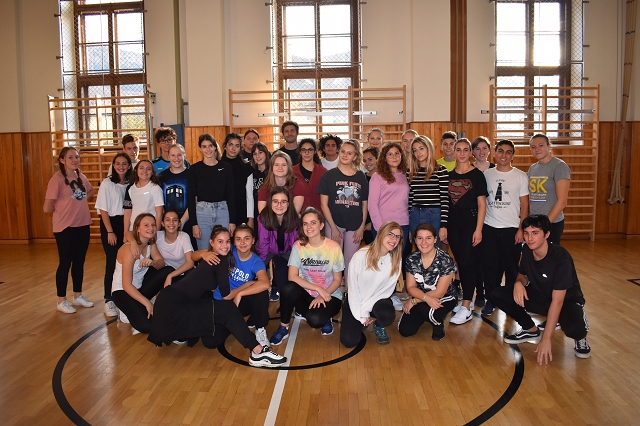 Later in the evening we came together for a welcome dinner at “Hotel Freitag”. There we also celebrated a surprise birthday party for one of the Erasmus students, called Saphira. We sang birthday songs in four different languages, showing the diversity of the students. We ate a cake made by Saphira´s grandmother and ended the evening by dancing to various songs from all the different countries. 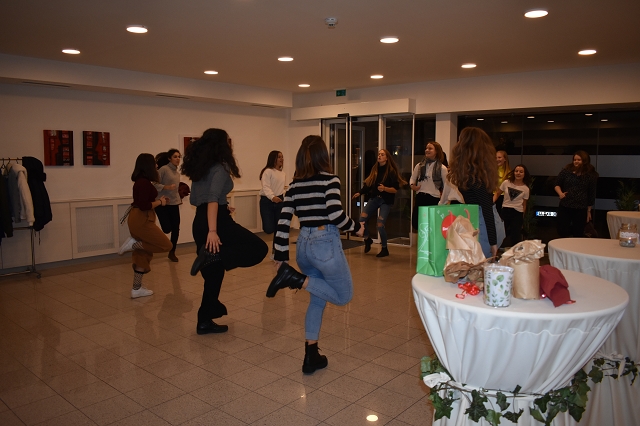 Tuesday, 12th November 2019
On Tuesday, we left St. Paul at 8 a.m. and arrived at the chocolate factory Zotter at 10 a.m.. There we watched a video about the making of the Zotter chocolate, and after that we were shown how the chocolate is produced, and we could also taste every kind they have. All of us ate a lot of different kinds of chocolate like for example one with the taste of flowers, a special one with hemp or one with pumpkin taste. 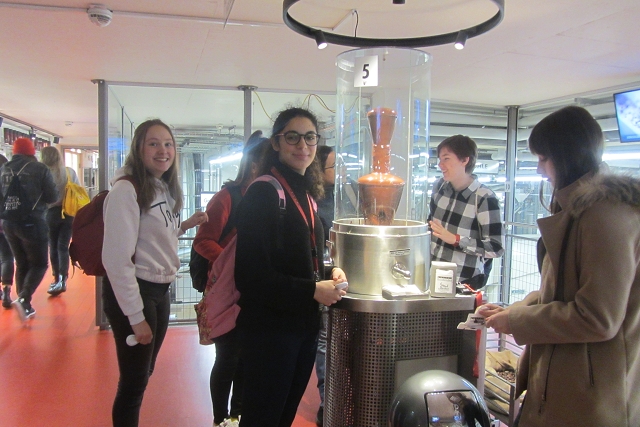 After the tour, we bought some chocolate for our families, left the factory and went to Graz, the capital city of Styria. When we arrived, we spread out to have some lunch and got together again at a special building, where we met our tour guide. The guide, Helena, showed us a little bit of the city, even though it was raining all the time. We saw the city cathedral, where she told us the story of Saint Francesco. 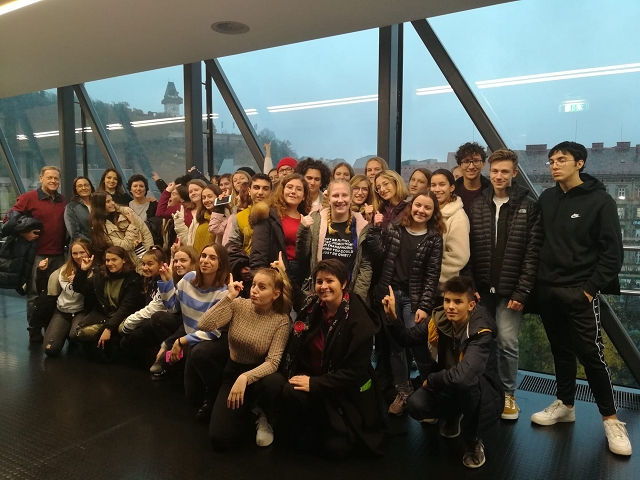 She led us to a strange building full of art where we could see the clocktower of Graz and a small island in the middle of the river right in front of us. Then we crossed the river and had some free time which we used to buy souvenirs for the families we left in Sicily and Thessaloniki. We had to leave Graz at 6 p.m. and arrived again in St. Paul, where we were allowed to go home. Even after the long day, everyone of us did something in the evening, like for example going to a coffee shop to talk and laugh or just watching a movie at home.

Wednesday, 13th November 2019
On Wednesday in the morning we went to school by train. There our day started with three music lessons with Prof. Thomas Zdravja. At first, we did some exercises to warm up our voices, and then we formed different groups and started writing our own song. Each group wrote one verse, and at the end we put them together. After that the teacher composed the music for our text. We decided to call the song “Let’s stop bullying together”. 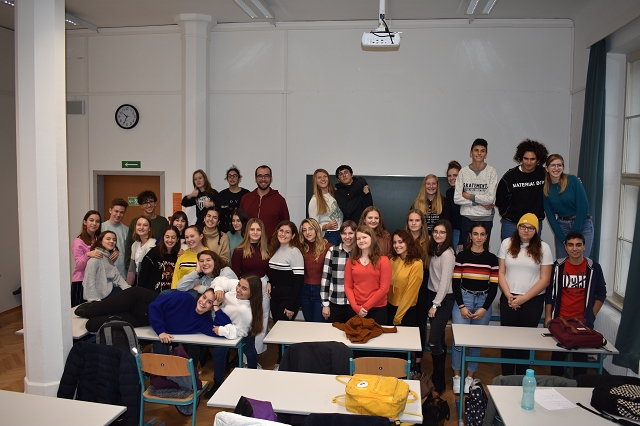 After a little break we enjoyed two art lessons with the Greek teachers Prof. Nana Diamandi and Prof. Melina Gialama. First, we had to draw a face that reflects the consequences and feeling of bullying. Later the Greek group gave a presentation about the artistic aspects of bullying. They presented us “The Bully Project Mosaic”. In this project 16 different artworks represent feelings and statements about bullying.  Furthermore, they showed us different kinds of artworks like music, films and paintings, which related to the main topic bullying. 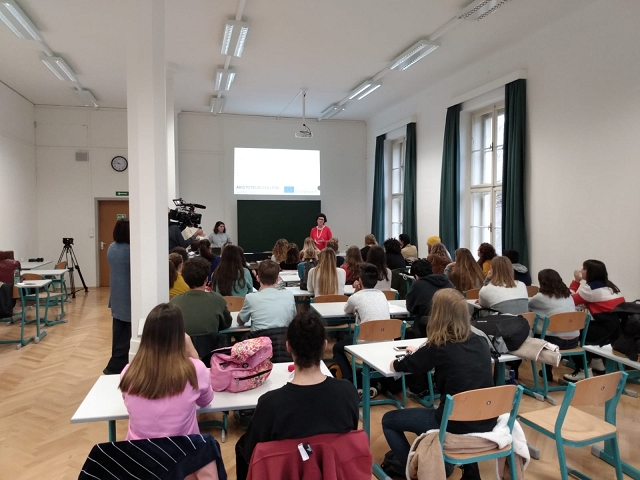 For this school day the Italian group had also prepared a presentation. Prof. Eleonora Militello explained the challenges that students with special needs have to face, and that they are prone to bullying. Additionally, the other teacher Prof. Enrico Savuto told us about cyber-bullying and how the law can protect the victims. Moreover, he described the differences between the law in Austria, Greece and Italy. The Italian students provided an example for behavioural disorders from both the victims and the bullies. 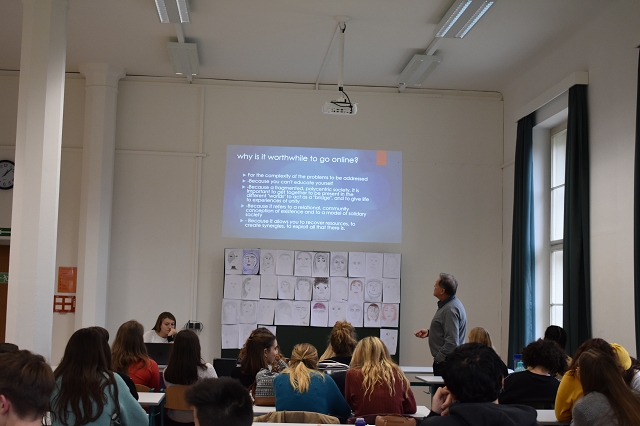 When the school day ended all students went home and had lunch. Dario and I tried self-made “Wiener Schnitzel” with the traditional cranberry jam. Later we went to a sports hall with Luca and Valerio to play squash. Afterwards we went to a gambling hall where we played billiard, darts and table-football. At the end we ate some pizza and then we went home. We all had a very nice day together and we enjoyed it a lot.

Thursday, 14th November 2019
On Thursday we went to Klagenfurt by train. We were accompanied by Prof. Melina Gialama and Prof. Nana Diamandi from Greece, Prof. Eleonora Militello and Prof. Enrico Savuto from Italy and Prof. Andreas Kirisits from Austria. Our first stop in the city was the Carinthian Government. There we met three employees, and they showed us the office of Peter Kaiser, the governor of Carinthia. They talked about different duties of politicians in Austria, about the cooperation of the three participating countries Austria, Italy and Greece in the European Union, and we were shown the meeting room where important decisions for Carinthia are made. After the tour we took some pictures and they provided something to eat, like “Schnitzelsemmel” and chocolate cake. 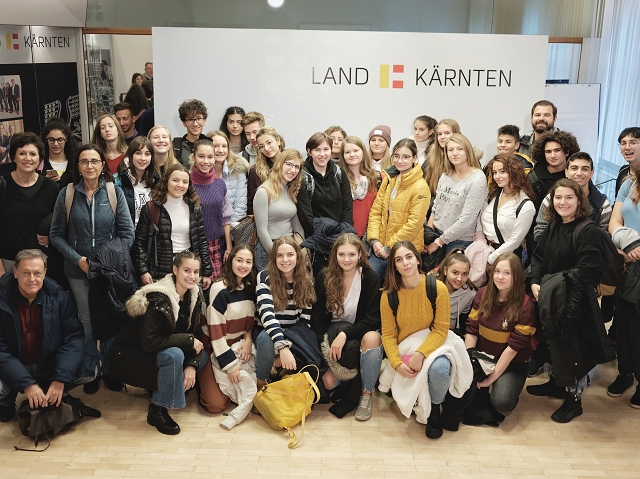 Prof. Andreas Kirisits lead us through the city to a Christmas market and to the “Alter Platz” in the city-centre of Klagenfurt. It was a beautiful place and we took lots of pictures together. It was also our final meeting point and from there we went along in separated groups to do as we pleased. Many of us went to the Harry Potter Caféto to enjoy “Butterbeer” and “Harry’s Birthday cake”. A must on our to-do-list was also a visit to the “City Arkaden Klagenfurt”, the biggest shopping centre in the city. There we bought clothes, beauty products and souvenirs for the families of the exchange students. 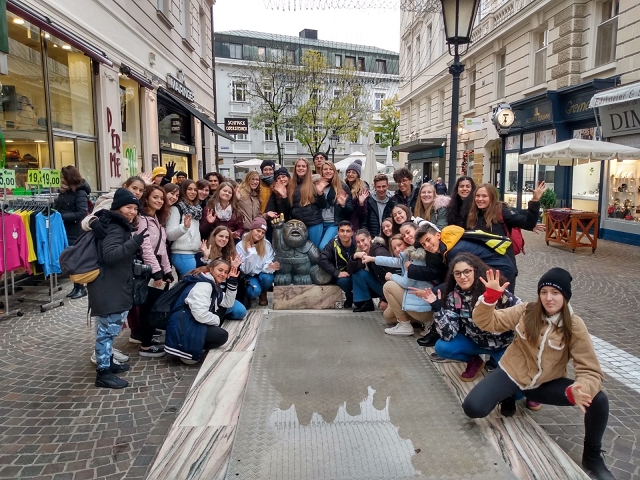 At 13:30 we met again with our teachers at the south exit of “City Arkaden” in order to make sure that everyone was okay. Then we were officially released. Some of us went to eat sushi, while others preferred Italian food like pizza, and in the afternoon most of us stayed in Klagenfurt to either continue shopping or go sightseeing. The Italian group went to play bowling and the Greek group had a get-together at Kathi’s place, where we rehearsed the “cup song”. Overall it was a great day, everyone had a lot of fun and a good time, and together we experienced things that we will surely never forget.

Friday, 15th November 2019
As this was our last full day together, it can also be described as one of the most eventful days of the week. In the morning we had an ICT- class with Prof. Lena Tomitz in which we digitalised the progress we had made during this week. We either did videos, word- documents, power- point presentations or word- clouds. Then we went to the school’s celebration- hall and prepared for the farewell event which would take place the same evening. 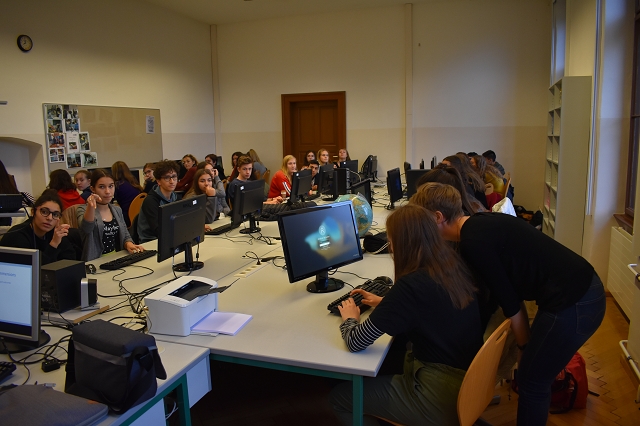 In our granted free time, most of us went to the Koralpe to show our friends the magnificent Carinthian mountain view and, of course, snow. We did a bit of hiking and had a snowball fight before we refreshed ourselves with hot chocolate, tea and Christmas cookies. Again, it was time to leave and before we all headed back to St. Paul, we had about an hour to get ready for the Farewell- event. 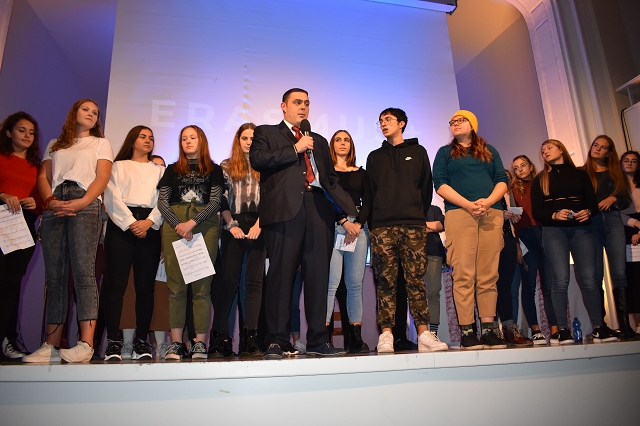 The event started with us singing our own song “Let’s stop bullying together” which we had written with Prof. Thomas Zdravja on Wednesday. Then the two Austrian- students Lea and Alexandra took over who did the moderation and led the audience through the evening. This included the so called “Intercultural interview”, national Italian and Greek dances, watching the “Erasmus- video” made by Robert Grundnig, exchanging the gifts for the foreign teachers and last but not least, everyone receiving a certificate of attendance. 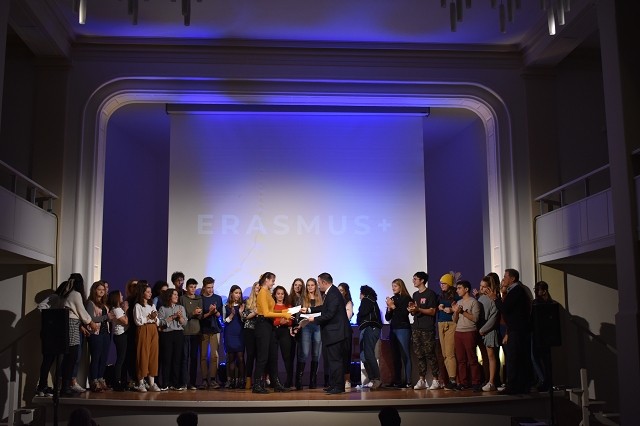 Before we could even blink twice, it was time for dinner at Poppmeier’s where we got traditional Austrian dishes served.  At the end of the day, we separated in groups and had an individual goodbye- party. I believe we all stayed up quite late, because none of us wanted this magical day and week to end.

Saturday, 16th November 2019
This day was by far the most emotional day of the week. It was the day of departure for our newly found friends. It is quite understandable that a lot of tears were shed and a lot of bear hugs given. Never could we have imagined that saying goodbye would be so hard after just one week. Maybe the fact that we all had to get up quite early, also added to our level of emotional stress. But thankfully our teachers and parents were present to calm us down a bit and they patiently waited while we said our tearful goodbyes. When they finished checking in their luggage and went through the security check, it felt like we had lost life-long friends, although we’d only known each other for a short period. 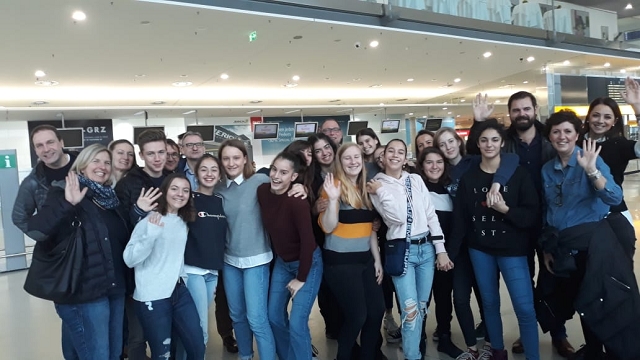 But that’s exactly what Erasmus is supposed to be and this week proved the importance of this project. Namely that no matter where you’re from and what your personal background is, you can connect with other people around the globe who are, at first look, completely different, but when looking more closely, the same.